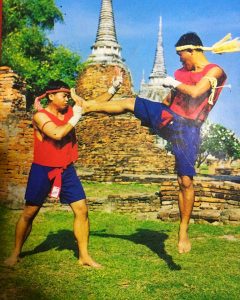 Muay Thai is a combative sport which allows the use of almost all bodily organs, e.g., head, hand (fist), foot, knee, and elbow, as weapons in combat. Furthermore, it is an art demonstrating ability in moving various parts of the body in combat and self-defense to the accompaniment of music. It is a kind of sport that develops functional efficiency in the body systems, as well as mental development and self-comidence. It can be very useful in daily life since Muay Thai requires prompt decision making. Those who train consistently in Muay Thai will be enabled to make good swift decisions oto solve their problems effectively.

Muay Thai is an individual unarmed combat activity, therefore a high level of fitness, both physical and mental must be reached through consistent training. The combat may be fatal, particularly when the training is inadequate, and therefore the competitors must strictly follow the rules and regulations as well as having good manners and sportsmanship.

Training in Muay Thai promotes physical , mental, emotional, and social development as well as transmitting and preserving Thai culture. It is a form of martial art that can be used for self-defence if endangered. In addition, good fighters can earn a lot of money, many competitors receive hundreds thousand Baht for each fight.

Customs to be observed by Muay Thai Trainees

Manners to which the Trainees must strictly adhere are the demonstration of respect and gratitude to their teachers who have imparted the knowledge to them and performing a ritual of acceptance before beginning training. Furthermore, new-comers must pay respect to their seniors and not fight against others taught by the same thacher. The trainee swears to observe these things at the ritual of acceptance. In addition, the trainee must be very patient, attentive and obedient since accidents are otherwise likely to occur throughout the training.

Muay Thai is a martial art which allows the use of various bodily organs for fighting. It originated in Thailand long ago and can be traced back to the sukhothai period which is about 800 years ago. It is now practiced all round the world and sometimes referred to as Thai Boxing, but should not be called Kick Boxing.

Muay thai bas been part of military training since ancient times to supplement the use of sword and pike in war. It was also employed for recreation, exercise, and self-defence. There are always Muay Thai Contest at annual festiveals particularly in those for charity.

Muay Thai was one of the skills of kings in the old times,Pra Chao Sua, a king in theAyudhya period, often visited villages in cognito to challenge local fighters in order to find recruits. According to the Department of Fine Arts, Nai Khanom Thom, Who was captured by the Burmese during the fall of ayudhya, defeated ten Burmese fighters consecutively in a contest on March 17, 1770. The day is now commemorated as “muay Thai Day”.

In 1927, the Ministry of the Interior legislated for the Regulation of Conditions for Permitting Betting in Boxing and Wrestling in accordance With the Betting Act B”E” 2470 (1927). The rules of competition were established by the Department of Physical Education and have been effective from April I, 1937.

Muay Thai has become a professional sport since the promotion of contests at the Suan Kularb Ring. The audience, sat or stood around the ring which was on the ground and was 20 metres in size. The contestants tied their hands with strips of cottn, wore “Mongkon” at the head and armbonds on both arms. The first stadium for professional Muay Thai, Rajadamnoen stadium, was opened on December 23, 1945. The Rules have been revised, and some equipment for injury-prevention has been introduced.

Muay Thai has been a sport for competitions since 1971. The first competition was held in Bangkok with competitors from five institutes: Srinakarin University: the Colleges of Physical Education at Chiang Mai, Maha Sarakham, Tala, and Chon Bun. Mr.Sawaeng siriplai was one of the of amateur Muay Thai who introduced rules for and head to prevent injury. The first time that Muay Thai was one of The competitive Muay Thai Championship was organized by the newly established Lnternational Amateur Muay Thai Federation (I.A.M.T.F.) in Bangkok in 1995.