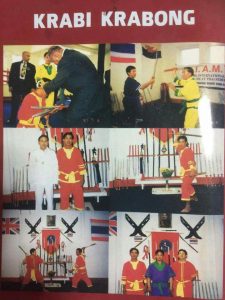 Human beings were born with an instinct to fight for survival, especially self-defence against the most serious danger, that is, “the danger of war”. Each human race created methods of self-defence both with and without weapons, varing according to geographical and racial characteristics, until they became their national art of self-defence and a part of their culture. In Thailand, the Thai art of self-defence with bare hands is “Muay Thai” and one of those withweapons is, e.g., Krabi-Krabong. Both of the arts of fighting have kept Thailand an independent country up until the present day.
The Sukhothai, Ayudhaya, Thonburi and early Rattanakosin (Kings Rama I – IV) periods of Thailand were all periods of wars against invaders...